I don't know why, but I was under the impression that we, as a group, had moved past shaming other women. I guess I'm really sheltered within my own group of homies and Twitter peeps, since I haven't seen it THIS MUCH lately.

It's all Kim Kardashian's fault.

Well, let me explain. I don't want to start off by saying that I severely dislike her, because that's not really the point at hand. She posted a selfie the other day. It was a nude selfie. She wasn't wearing any clothes, took a picture, and posted it online.

Lots of people already think that she's a slut or a whore or whatever, so this was sort of like icing on the cake. I didn't really expect a lot of people to be so upset, because it's not like this is new for her. But for some reason, people got really outraged. Especially celebrity women. So I have a few examples: 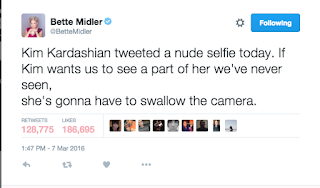 And I saved the best for last. This was tweeted by Pink (screenshotted in case she deletes it): 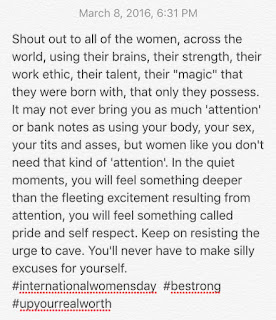 I guess that I'll start by saying that I'm so disappointed in these ladies. They all present themselves as being such symbols of feminism and girl power. I suppose that this one instance doesn't strip away everything that they've done and stood for, but it does reveal much about their thoughts. This leads me to wonder how much they can support women with these mind sets.

While I get that Kim Kardashian is irritating, I feel like there's a difference between saying that and shaming her for her body. Yes, she got famous for no reason. Yes, she doesn't have any talent. I know that no one likes her. But the fact that she has managed to stay famous is something. But let's forget all of that - she's still a woman. A grown ass woman. She's still a person.

Do you know what that means? She can do whatever the fuck she wants.

I don't understand what the point of feminism is if it doesn't advocate for women being equal to men. That's what these women claim to be doing, but they're not. Why do they think that their ideas of what is "correct" are law? Why does Kim have to abide by them? This is a reason why a lot of women are turned off of feminism.

Look. Kim makes money by doing lots of things. One of those things happens to be displaying her body. Great! She's rich and successful! I don't know why all these ladies are jumping at Kim, though. And not all of the other people who pose naked.

Like, homies, why is it different when you do it? I don't understand the shaming of Kim. Just because she poses naked doesn't mean that she has a lack of morals or goals or anything of the sort. I feel like discussing this in regards to Kim Kardashian is tricky, because she does do a lot of stupid things (like cultural appropriation CONSTANTLY.)

But we aren't talking about that here.

When it comes down to it, a woman's body shouldn't be sexualized in the first place. The fact is that our bodies have been sexualized by society, and I get that. I just don't agree with it. I also don't think that posting a naked picture means that someone doesn't have any respect for herself.

Chris Hemsworth/The Rock/lots of other hot guys take off their shirts CONSTANTLY. Walk around in boxers in movies or even out in the street. The Rock has posted a large sum of pictures without a shirt on, which can be viewed on his Twitter account. No one is lecturing them about their lack of self respect.

Part of being equal to men is having the same control of our bodies as they do. When a woman can't post a picture of herself without being shamed BY OTHER WOMEN, there's definitely a problem. Especially if these women claim to be feminists.

That sort of thinking is so outdated. I can't believe that I'm hearing this from people like Chloe Moretz and Pink. This also ties in with the topic of white feminism, which I've spoken about a lot before. I guess feminism is only helpful when you're trying to sell movie tickets or records and need to talk about girl power? It doesn't apply when it comes to female sex workers or, you know, women who want to post pictures.

(By the way, white feminism is when a woman is only into feminism for herself. Feminism is supposed to be about all women. Not just one type of woman, whether that is one who has white skin or one who doesn't pose for naked pictures.)

Being uncomfortable with nudity isn't bad. Thinking that it is degrading isn't bad, necessarily. I just don't understand why one person's opinion should be a law that everyone else has to abide by. If you think that posing naked reflects poorly on yourself, don't do it. No one is telling you to give Kim K a hi-five. Just let her do her thing.

I don't mean to frame this like "women against women" is the issue. No, this is truly the issue of internalized patriarchy.

I was having a conversation with two lovely ladies on Twitter earlier today about reprogramming yourself. What I pulled from this conversation was this - the thoughts that we think first are almost like reflexes. What we think next is most important. We've been fed so many messages through society that taught us to hate and police ourselves. I'm not going to pretend that unlearning isn't a thing, and a difficult one at that.

So, by calling these women out (or whatever), I don't mean to demonize them or distance them or say that their feminism is sub-par. My hope (even though none of them will probably read this), is that explaining why this mode of thinking/acting is damaging will lead to awareness. If women are aware of internalized patriarchy, they're one step closer toward fighting it off.

But sometimes, ladies are just jerks. I guess this could be another one of those things. I'm not going to let myself believe that, though.

Email ThisBlogThis!Share to TwitterShare to FacebookShare to Pinterest
Labels: celebrities are overrated, even though you didn't ask, feminism, problematic af, white feminism

Seek and You Shall Find